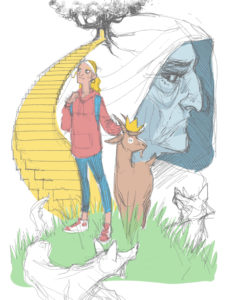 Dagaz Media is looking for voice actors for OF FAE & FIENDS, an original dark faerie tale (is there any other kind?) by Fred Greenhalgh.

Ten-year-old Lizzie has never visited her family’s ancestral farmhouse in Maine — her mom refuses to  return to the place of a childhood trauma she’ll never talk about. This all changes when Lizzie’s grandmum suffers an injury and mom reluctantly returns to Maine with Lizzie in tow. Lizzie discovers strange tapes in the attic, a magical talking goat, and the most extraordinary thing of all: a gateway into the land of Fae.

Soon, Lizzie finds herself stuck in Fae, with the magic goat as her only companion, forced on a quest to end a set of events that started long before she was born… Events set into motion by her uncle [and power-hungry warlock] Carlow, who has corrupted the goblin kingdom and plans to conquer all of Fae unless Lizzie and her friends can stop him.

A contemporary dark fable in the style of Neil Gaiman, OF FAE & FIENDS is a story that explores childhood trauma, family secrets, and the nature of magic and fantastical creatures (who are as likely to devour you as to grant you wishes).

We have a webform for submitting audition demos at the bottom of this page. Real through the character roles and record sides using the audition script below.

LIZZIE (she/her, 10, preference for actor who identifies as biracial)
Lizzie is an introspective girl who has grown up as an only child with a single mother in New York City. She is more comfortable in central park than in the thrum of the City, so it’s no surprise that she falls immediately in love with the strange, rambling farmhouse and environs of her (mom’s side) family’s ancestral home. She also is the kind of kid who is a lot less surprised that a magic goat starts talking to her than you’d think.

KYLE, the GOAT (he/him, adult, magical being)
Kyllidrian the seventh of the line of Breathnach, or Kyle for short, is not actually a goat, but a unicorn who was called to the human world in his youthful 120th year. Kyle’s horn was cut from him, and in losing his magical powers, he got stuck in the human world. Time passes differently in the human world from Fae, and so Kyle is much more tired than his age in unicorn-years would suggest. Kyle dearly loves Lizzie’s family and is determined to protect her, and use his powers to help her right the wrongs of old.

GARRETT, the WEASEL (he/him, adult, magical being)
Garrett the weasel is a trickster-like dasher & derring-doer, the natural nemesis of the cockatrice, rapier-for-hire swordsman, and bard — singing his own praises since no one else will sing them. He has lived exclusively in Fae for all his days and knows little of the human realm. (Use of ‘he’ pronouns is a convenience but Garrett is nonbinary)

CARLOW, the WARLOCK (he/him, 30s, white)
Carlow has been trapped in the world of Fae ever since he did something very very bad at around age 10. In the human world he’d be in his 60s, but time moves weirdly in Fae, he has actually lived what feels like 100 years to him, but only aged around ~20 years as a human. He is a low-down, no good, cunning villain who would steal from anyone and everyone (including his mom) to advance his own needs. His motto is that, “if something is there for the taking, I’m going to take it, and you all were stupid for leaving it there for me to take in the first place.” His current life goals are to use his army of corrupted goblins to conquer the Fae and crown him grand master of the kingdom.

QUEEN OF FAE (she/her, timeless magical being)
Considered by the creatures of Fae to be a goddess, the Queen of Fae is the matriarch, the holder of balance, the nexus of the world tree, the one who channels the flow of the magic springs that feeds all magical creatures… Until an attack by a warlock changes her perspective on everything. In FAE & FIENDS faeries are depicted as very much non-human creatures, a mashup between lightning bugs, dragonflies, and grasshoppers.

DEBBIE (she/her, 60s)
Carlow’s cousin, at times sweet and at others sharp as a knife. She harbors a long family secret that will be the core to Lizzie’s quest.

Various CHARACTER voices
Gender/racial identity not assigned to any of these parts and we strongly encourage people of backgrounds underrepresented in fantasy storytelling to audition.

*** For Character Voices it may be possible for you to record remotely, so consider this a worldwide open audition for these parts ***