Dagaz Media was co-founded by Fred Greenhalgh and William Dufris in 2018. The duo had previously worked together on projects including The X-Files: Cold Cases and Stolen Lives, and Locke and Key. In March 2020, William passed from esophogeal cancer. We’ve built this page to celebrate his life and legacy. 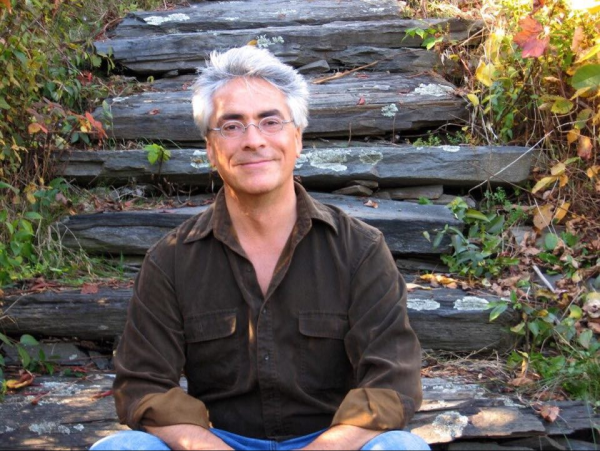 Millions who never met William Dufris have heard his voice. Whether it was his voicing of the children’s character Bob the Builder or his narration of one of 400+ audiobooks, Bill’s voice was heard in living rooms, on car rides, and in earbuds around the world. To those who knew the man behind the microphone, Bill will be remembered as a ceaselessly positive human, delivering hugs and guffaws, bringing out the best in the people around him, and condemning the wrongs in the world.

Bill left this world on March 24, 2020, surrounded by his family after an epic battle with esophageal cancer. He leaves behind an audiobook and audio drama legacy and a devoted circle of family and friends whose talents he was continuously lifting. At a celebration of his life last November, colleagues and friends toasted him with stories of his impact on their lives for five continuous hours.

Bill was the first of six children born to Edward and Bernice Duffy in Houlton, Maine, in 1958. Inheriting a passion for reading and music from his mother, he was pulled toward all things theatrical. As a young boy, he loved doing various voices, including the Looney Tunes and Merry Melodies characters — Daffy Duck, Elmer Fudd, Bugs Bunny, Speedy Gonzalez, and Foghorn Leghorn. Other favorite childhood impersonations included Inspector Clouseau of the Pink Panther and Fat Albert of the Cosby Kids. While studying acting at the University of Southern Maine, he performed in many theater productions including True West, where he shared the stage with David LaGraffe, who became his lifelong friend.

Looking for larger stages and experiences, Bill moved to the UK. There he worked with BBC innovator Dirk Maggs and established his love for radio drama. For BBC Radio, he played the role of Peter Parker in Spiderman as well as performing in American Werewolf in London, Judge Dredd, and Voyage. Bill founded his own performing group, The Story Circle, in London and taught acting to young people. He would lovingly refer to these students as his “kids” for the rest of his life.

Just as Bill was returning to the US, he landed the title role in the Bob the Builder cartoon. His performance in the series’ roles of Bob, Farmer Pickles, Mr. Beasley, and Mr. Sabatini catapulted him to voiceover fame in the 1990s. Playing the role until 2005, Bill always enthusiastically fulfilled requests to call fans on their birthdays or in the hospital to wish them well in character.

His passion for voicing animation extended to the burgeoning field of audiobooks. Bill was one of the first in the United States to build an independent, all-digital production house, what became Mind’s Eye Productions. The community of regional and national actors he brought into this Southern Maine studio was soon competing with much larger facilities in New York, Los Angeles, and London. When he needed to cast a production, he cast not only award-winning narrators and nationally known actors, but also local actors whose work he respected equally.  He was nominated twelve times as an audiobook finalist for the APA’s prestigious Audie Awards and won the Best Non-Fiction Award in 2012. He was named “one of the best voices of the century” by AudioFile.

Bill’s passion for the immersive audio dramas he’d done in his days at the BBC never left him. In addition to his audiobook narration and production business, he worked to revive the art of radio drama in America. He launched the Rocky Coast Radio Theatre, which produced dramatizations of classic horror stories by Ray Bradbury, HP Lovecraft, Edgar Allen Poe, and others. With Lance Roger Axt, Bill co-founded AudioComics to develop immersive audio stories from the pages of graphic novels.

Bill considered his crowning achievement to be the adaptation of Locke & Key by Joe Hill and Gabe Rodriguez. This was the first project where Bill collaborated with audio field recordist Fred Greenhalgh. Their collaborations would come to be known as “Bill and Fred’s Excellent Adventures” by their publisher, Audible, and others. Bill and Fred transformed Hill and Rodriguez’s 700-page graphic novel into an immersive long-form audio play, recorded not just in the studio, but on location. They captured performances in old mill buildings in Biddeford, Maine, and a haunted house in Old Orchard Beach — there’s even a rumor they stuffed some actors into the trunks of cars. The production included a cast of over 50 actors with appearances by Haley Joel Osment, Tatiana Maslany, Kate Mulgrew, Joe Hill, Gabriel Rodriguez, Maine humorist Tim Sample, and Stephen King.

The success of Locke & Key lead to the AudioComics team to develop an audioplay based on The X-Files, also for Audible. Bill was able to collaborate again with BBC legend and friend Dirk Maggs to record with the X-File original television cast including David Duchovny, Gillian Anderson, Mitch Pileggi, William Davis, and the “Lone Gunmen” Dean Haglund, Tom Braidwood, Bruce Harwood. As always, the cast also included a network of local and international actors.

Bill kept producing audio plays and audiobooks up to and through his cancer diagnosis in 2018. Throughout his battle with cancer, he fought the disease with levity and grace, never lamenting his fate. In celebration of the end of his first set of treatments, Bill got the hospital staff to participate in a music video where he leapt out of a wheelchair and started dancing.

When cancer came knocking again in 2019, Bill handled it with the same characteristic upbeat attitude and spirit of positivity. He spent the last years of his life working hard to push forward the creative community he helped build up around him, preparing teams to take over for him as producer, director, and other roles. He even found time to offer free workshops for new voice actors. Bill believed that any good fortune that came his way should be abundantly shared with others.

Bill’s legacy includes well over 100 hours of recorded audio drama work, hundreds of audiobooks, three companies, and personal stories of such multitude and drama that they could fill many volumes of Arabian Nights.

Bill is survived by the love of his life, his wife Maria Reuillard, and his beloved step-children Gwendolyn, Emily, Ben, Rebecca, and Jacob Myshrall. He also leaves behind cherished siblings Ruthann Duffy, Michael Duffy, and Diane Hiscoe, and his nieces and nephews. It is this family that feels Bill’s step from the stage the most acutely. Bill’s passing follows the departure of his parents and his brothers Jimmy and Thomas Duffy.

In lieu of flowers please perform a random act of kindness, lift the work of another, or take a creative risk. Try painting or dancing unexpectedly. Chalk an anonymous message on a sidewalk or shout out your love for those around you.