A major Catastrophic Event, known as the C.E. has left less than 10,000 people on the planet. The actual population of the world is not known. A group of humans, known as The Collective, decide to not have children as a way of saving humanity from the inherent human legacy of barbarism.

Nora Harlem, a 28 yr. old who survived the C.E., is carrying a secret, as she makes a harrowing trek to seek shelter in New Mexico, where she finds unlikely protectors.

Listen to the Audioplay 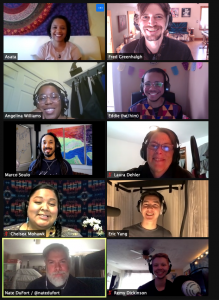 While we originally intended to record the project on-location in Albuquerque, New Mexico, COVID-19 had other ideas and we pivoted to recording the project remotely. The cast ultimately included 20 people on three continents, and six timezones!

Actors were able to collaborate in real-time using Cleanfeed software (for high-fidelity audio and remote recording) and Zoom (for video). We recorded it mainly over the course of one weekend.

The Collective, is original audioplay created and written by Asata Radcliffe.

Recorded remotely by the performers during the worldwide COVID-19 pandemic.

Produced in part thanks to a grant from the Maine Arts Commission. Cover art by Alec Adams.