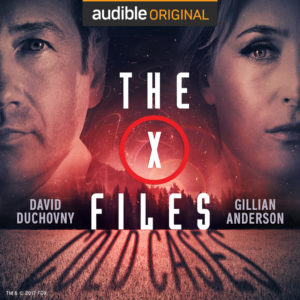 The series that had a generation looking to the sky gets a breathtaking audio reprise in an original full-cast dramatization featuring actors David Duchovny and Gillian Anderson returning to voice FBI agents Fox Mulder and Dana Scully.
Based upon the graphic novels by Joe Harris – with creative direction from series creator Chris Carter – and adapted specifically for the audio format by aural auteur Dirk Maggs (The Hitchhiker’s Guide to the Galaxy, Alien: Out of the Shadows), and directed by William Dufris of AudioComics, Cold Cases marks yet another thrilling addition to the pantheon of X-Files stories. Featuring a mind-blowing and otherworldly soundscape of liquefying aliens, hissing creatures, and humming spacecraft, listeners get to experience the duo’s investigations like never before.